Alkyl radicals are carbon radicals of normal chain and branched chain alkanes, available as reaction intermediates even at late stages of synthesis. Recently, it has become possible to generate alkyl radicals under mild conditions by using a photoredox catalyst with organic chemicals (radical precursors) under visible-light irradiation. However, since many photoredox catalysts are expensive and since it is necessary to consider the redox process of the catalysts themselves, chemical transformations may become complicated. Thus, a new method was reported on the generation of alkyl radicals by direct visible-light excitation, taking into account the photophysical properties of the organic chemicals themselves. This is an excellent method in which the use of photoredox catalysts is unnecessary. Nonetheless, there are limitations in terms of the carbon radical species that can be generated. For example, it was difficult to generate bulky tertiary alkyl radicals and unstable methyl radicals, which are useful carbon sources for chemical reactions. In addition, it is problematic that the generation of carbon radicals is accompanied by the generation of waste chemicals of large molecular mass. We reported a photoredox catalyst-free method for generating tertiary, secondary, and primary alkyl radicals by the direct visible-light excitation of alkylborates derived from a π-conjugated organoboron compound, boracene. This photoexcitation protocol could be applied to decyanoalkylation, Giese addition, and nickel-catalyzed carbon-carbon bond formations such as alkyl–aryl cross-coupling or three-component vicinal alkylarylation of alkenes, via SET reduction or simple photo-irradiation. As a result, various C(sp3) fragments could be introduced to organic molecules. The recovery and reusability of boracene after the reaction illustrated the synthetic usefulness of this system. 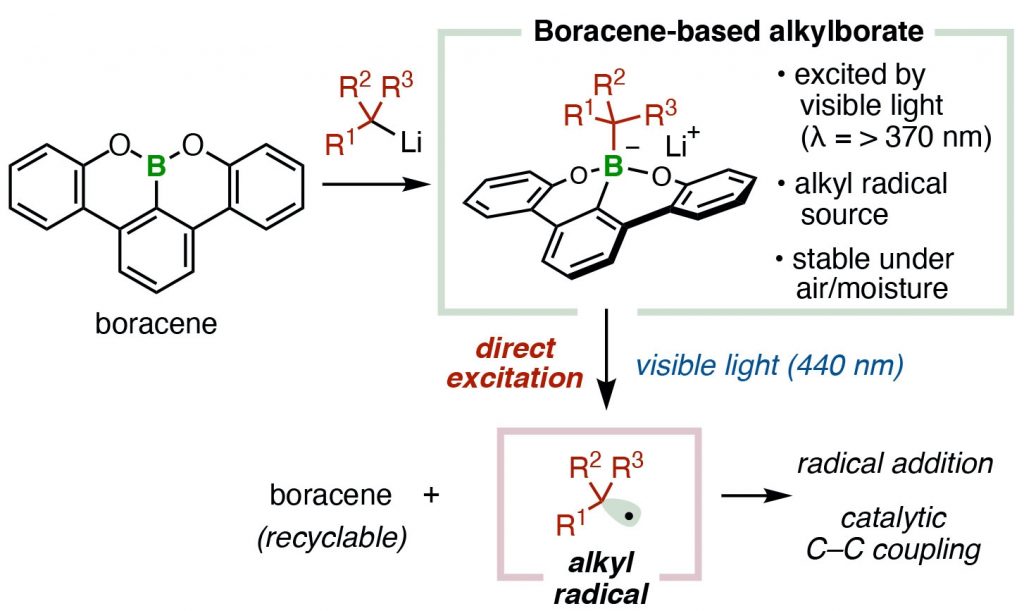